Last night John Baker, Paul Saeger, Candi Neilssen and I decided to ignore the mixed forecasts from various weather apps heading out to Sherman Park for what would have been the QCAS July Public Open House at Jens-Wendt Observatory if not for the event being officially canceled. (more about that at the end) We were joined by Heather and Tony from the QC Astronomy Facebook Group, our Web Host Jason Howell and two of his children, as well as a couple from Calamus who saw the cancellation posting but decided to come anyway.

All who joined enjoyed a cool dry night with a relaxing breeze and more importantly a clear dark sky! Two of our non-member guests brought their own beginner scopes. Paul set up and confirmed the club’s NexStar 8SE is back in working order. (Thanks Byron Davies!) John Baker showed off the 16″ scope in the dome. I manned the 20″ in the roll-off. I can’t speak for what all objects were observed in each scope by all those who attended but I can say that in the 20″ we had good views of Jupiter, the Lagoon Nebula (M8), the Ring Nebula (M57), Alberio, and Antares. Antares was a crowd favorite with it’s low position and a slight breeze people were comparing it to a dancing, crumpled, burning piece of paper. Towards 11:00pm the primary mirror had sufficiently cooled such that the view of Saturn was crystal clear also. Heather shared a few pics with us that she took afocally on the 20″ with her smartphone. First Jupiter with Callisto and Ganymede. Then Saturn with Tethys and Enceladus. 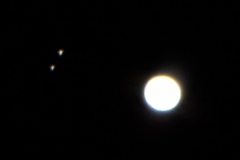 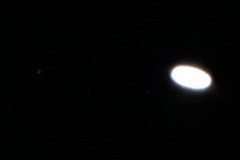 As well as a neat video of the roll-off opening from the inside.

By midnight most had cleared out and John, Paul and I stayed behind to have some photography fun.

At this point I need to pause to thank Steve VanHyfte for all the work he’s done recently in the roll-off building. The space is much cleaner, more open, more organized and just makes a bunch more sense. Steve’s work on balancing, polar aligning, and whatever other wizardry he pulled off has that scope tracking better than at any point I’ve seen since joining the club. The images included below would not have been possible without his expertise and dedication.

I started out on imaging M8 with the 20″. I used my trusty but worn Canon 60D with Astronomik CLS Clip in filter and Baader MPCC. The typical 30sec shot was not cutting it with the light pollution filter and bumping the ISO is a disaster on my camera these days so I went for a 60sec shot. Then 120 seconds, then 180, then 240! I’d never seen the scope track that well! At 300 seconds it became apparent that the trailing was hurting the image so I backed down. The breeze wasn’t helping either. The crispiest shot I got was at 120 seconds and ISO 400. Awesome! 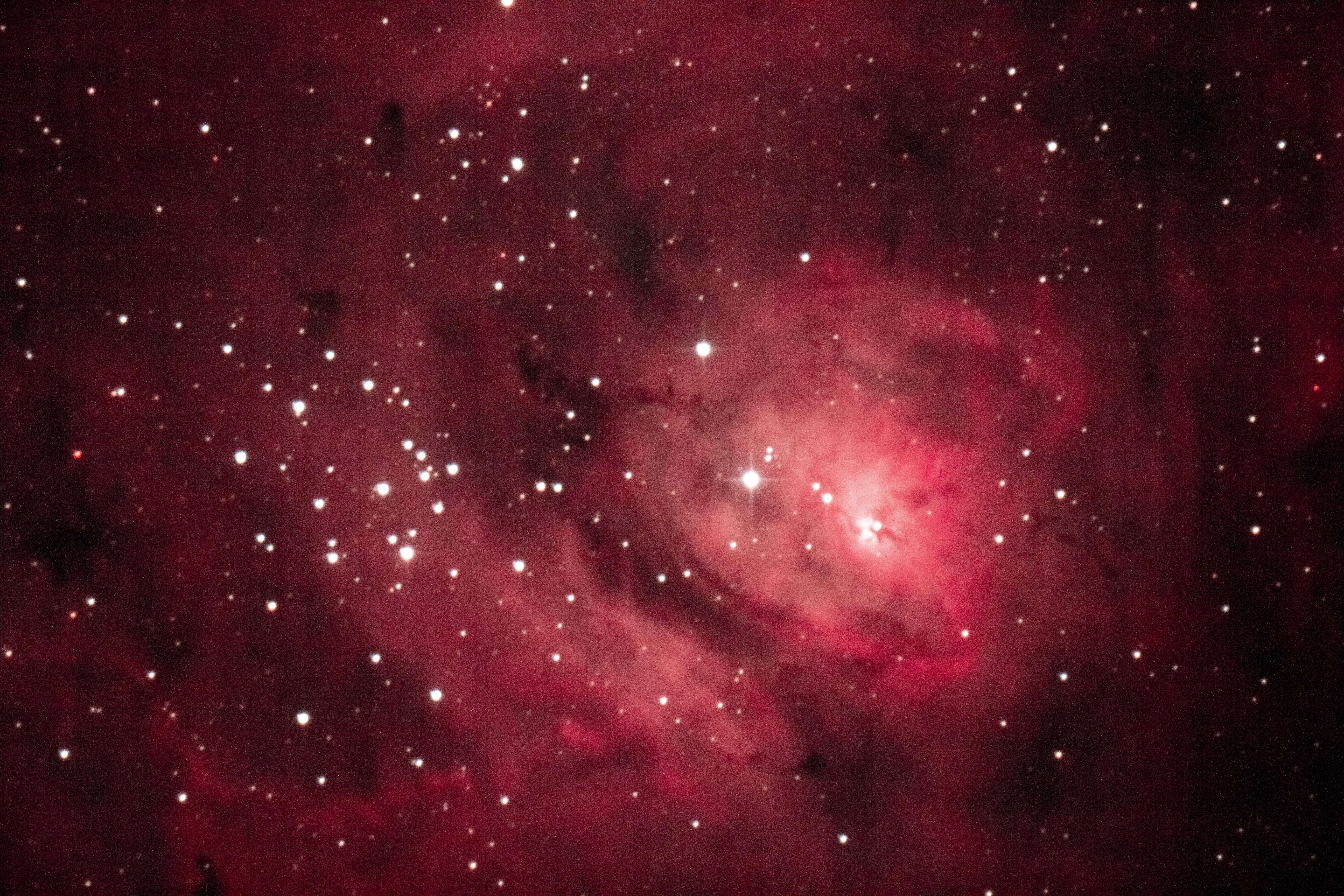 After that Paul and I decided to get ambitious. With zero help from a broken DSC computer, we set out to locate and shoot the Bubble Nebula (NGC 7635). After much trial and error we settled into a system that worked. First, locate Shedar in Cassiopeia with binoculars. Hop from Shedar to Caph, then go that distance again plus about 25% more to find a faint fuzzy almost perfectly centered between two stars. That faint fuzzy is the open cluster M52. If you see M52 then a third much dimmer star will be near making almost a right triangle around the cluster. That third star is right next to the Bubble.

Now to go from the view of from a 7×50 binocular to the camera in the focuser of the 20″ went something like this… I’m locating the Bubble with my binoculars while also holding a green laser and pointing that at the third star that’s next to the Bubble. Paul Saeger is laying on his back below the 20″ so that he could see through the Telrad to point the scope at the position of the end of the laser beam. John Baker is 12″ up a ladder looking through the viewfinder of my camera to get the scope to just the right place. This system worked three times to find the bubble after bumping, flipping, and once collimating the scope. It was hilariously tedious but paid off with some really great shots!

This is an image John hand stacked in Photoshop, using three of the sharpest Bubble shots. It’s better yet! 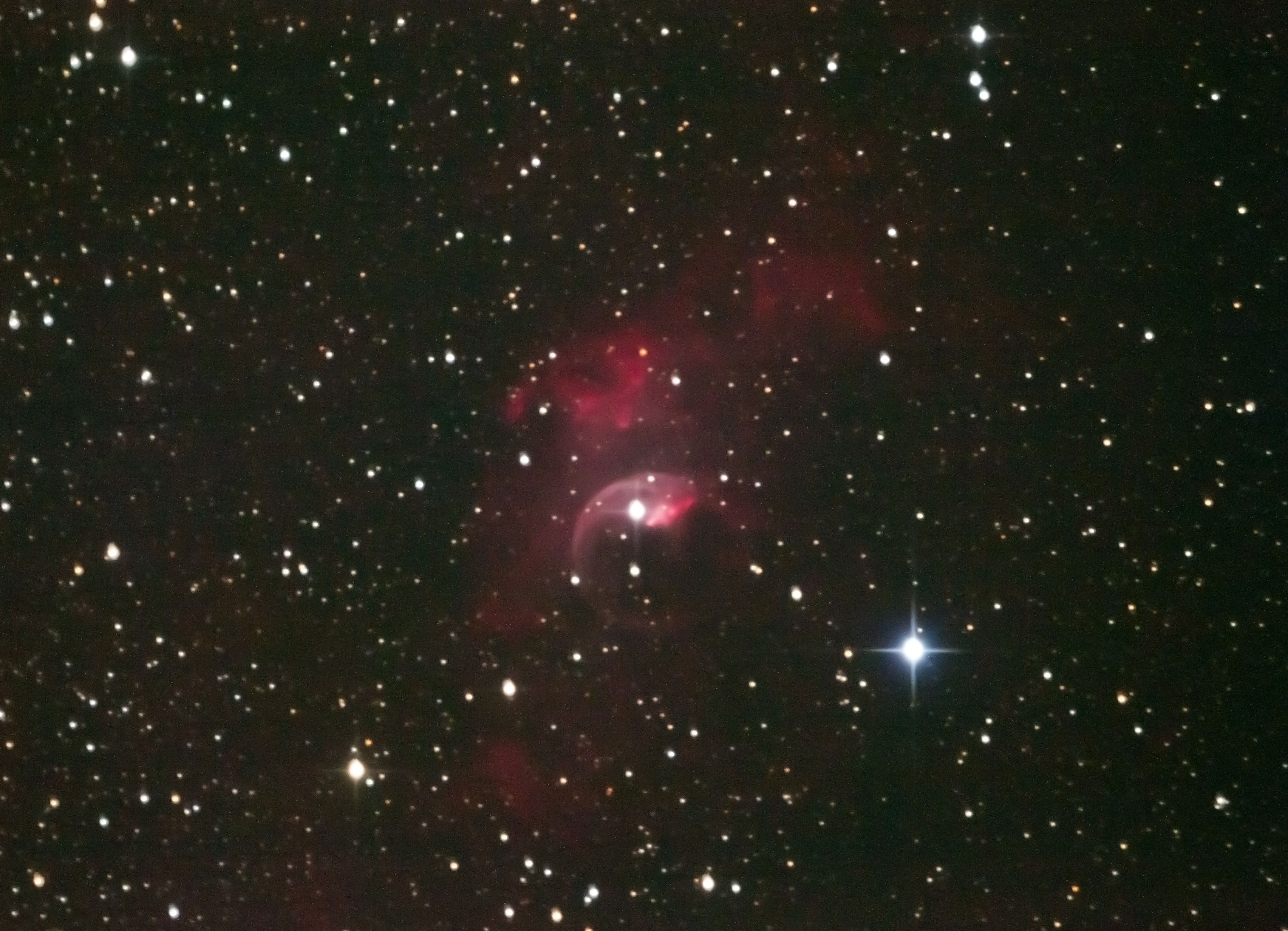 John and I ended up sticking around until just before sunrise. It was really nice to be out at the 20″ again. Hopefully there will be many unexpectedly successful nights to come!

A note at the end here: QCAS is committed to keeping our schedule of public events with all those interested in participating. There was a lot of discussion today about when/how we will determine whether events are to be cancelled and when/how we will be communicating cancellations in the event that they are necessary. Going forward, we will not be canceling events as long as at least one QCAS member is able to attend. Our membership is committed to manning every event that we schedule so long as it is safe for them to do so. Our observatories are in rural areas. We will be canceling any event for hazardous road conditions or if severe weather seems imminent. Sometimes our dates are spoiled by clouds or rain but that doesn’t mean you can’t come out to check out the facilities or even just to ragchew about amateur astronomy. We hope to see you all at one of our events in the future!