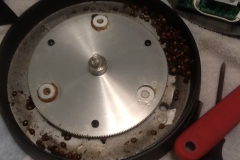 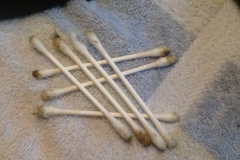 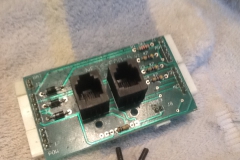 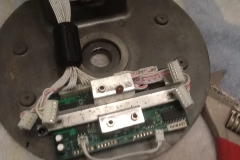 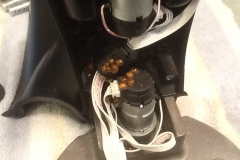 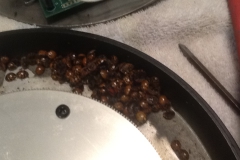 Meet the beetle grinder also know as our very own Celestron 8SE loaner scope.  Apparently these little critters felt the scope would be a nice winter hang out until spring.  Most of them found out they were dead wrong but only after they defecated and decomposed all over the inside of the scope including the circuit boards.  When bugs defecate and decompose they release natural sugars that wreak havoc on electronics acting like little short circuits across the circuit board.  This can and usually causes the electronics to fail meaning expensive repairs.  Lucky we were able to catch the problem early.

As I removed the access panels on the scope one by one the mess just morphed into hundreds of beetle corpses.  The shop vac was able to do most of the dirty work but some of the beetles were glued into place by decomposition.  It required using a pocket screw driver to clean the bugs out of the nooks and crannies in the structure of the mount.  Then came time for cleaning the circuit boards.  I swabbed the circuit boards with rubbing alcohol repeatedly until the swabs no longer showed any soiling being removed.  Did I say NASTY!! The boards were set aside to completely dry and then hit with compressed air.

I reassembled the scope and checked all motor control functions from the handset.  Everything responded correctly to the hand controller commands with out any issue.  Then I compared the hand set firmware version with the update website and found three new firmware updates available for the scope.  All three versions were successfully downloaded and installed.  There were no upgrades available for the motor control firmware.

Last came the optics.  The corrector plate glass had a residue on the inside apparently caused by moisture.  Can’t blame the bugs for this one.  I carefully marked the glass plate’s position and removed it for cleaning.  Upon removal I noticed that the secondary mirror had the same issue with the residue as well as the primary mirror.  This scope has been wet at some point in the past.  I removed the primary mirror and cleaned all optics with lens residual oil remover and rinsed with distilled water.  Then cleared off the water with can compressed air.  The optics were reinstalled and aligned with a Hotech advanced collimator.

This morning I took it out side for a test run in the daylight with the moon and Venus.  After completing a solar system alignment on the moon I selected Venus on the menu and it tracked over to its mark.  I switched back and forth between the two objects without issue.  The scope is debugged, updated and ready to rock.

We need to focus in the future about our loaner scope storage needs to keep this from being an issue.  The bugs do not know any better but we do!

About the Author: Byron Davies