Dusting off the scope

I have been eagerly waiting for a decent night to align with the work schedule to dust off the equipment for a little star gazing before we lose our winter sky gems.  Mike Dannefeldt and I decided to give it a shot on Tuesday the 26th as conditions were looking good for clears skies and the evil orb (moon) would not be an issue during our viewing time window.  I set up the 8″ Edge SCT with a four star alignment and plugged in the R2 Imager with the new high definition screen.

We manage to pack it in with views of M-42, NGC-2024 (Flame), M-1 (Crab),M-81/M-82, M-51, M-108, M-106, M-109,  NGC-2392 (Eskimo) and M-104 (Sombrero).  My neighbor’s deck lighting was making some of the viewing to the southwest difficult.  As we were viewing the Eskimo nebulae there was an object passing through the screen at a slow pace.  As the imager shot a frame of the object would show up moving against the grain in short lines.  It took about 30 seconds to move across the 7″ screen.  I have seen satellites move cross the screen before and they move through the screen fast.  This object moved considerably slower witch shows characteristics of an asteroid.  Mike took two pictures of the object moving past the Eskimo nebulae with his cell camera.  That was the excitement of the night.  We ended with M-104 low on the eastern horizon with a decent view of its structure earning its name the Sombrero galaxy.  Clear skies everyone! 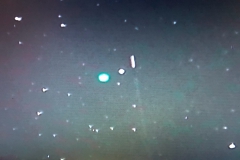 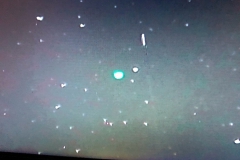 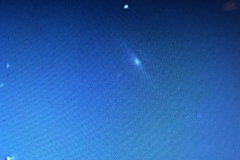 About the Author: Byron Davies