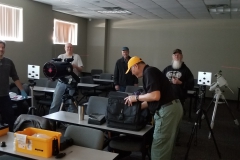 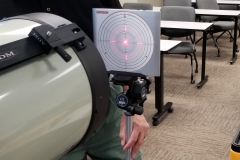 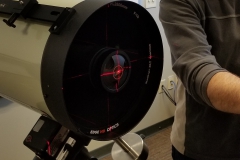 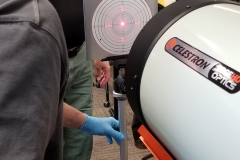 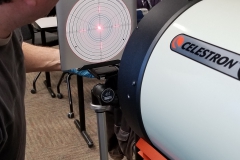 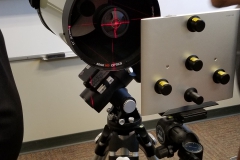 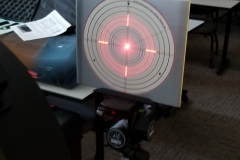 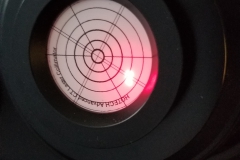 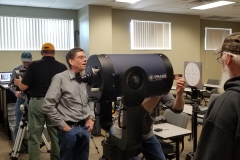 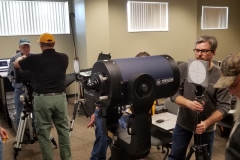 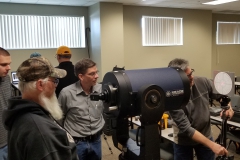 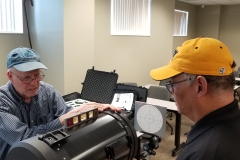 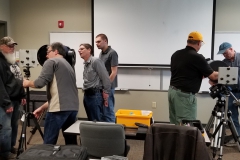 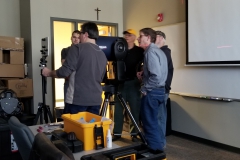 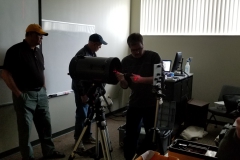 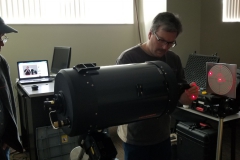 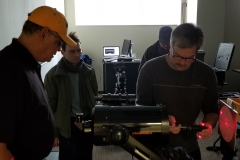 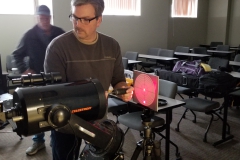 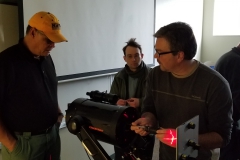 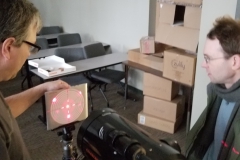 What a great time, and a great example of what we’d like our club to be… helping each other grow in our common interest… astronomy!

On the way to the event, at St Ambrose University McCarthy Hall room 003, I picked up a couple dozen donuts to have for munchies at the event… donuts and astronomy seem to go hand in hand!

Byron, Sam, Mike and I got there about 9:30 Am to make sure that the room was open, and that we had the area clean for the incoming scopes. We set up 2 EQ mounts for those that had their SCT’s set up in that manner, and we left a clearing by the door for folks that brought in their scopes on fork mounts. We had a couple boxes of tools to make any adjustments needed as well as 2 of the HoTech CT Collimators… we can do 2 scopes at a time!

Around 10:00 AM, folks started coming in with their SCT’s… we had scheduled people in roughly 1 hour increments, but advised that we could remain very flexible… and all worked quite well! Basically speaking, while Byron was tweaking on collimating 1 scope, Sam and Mike set up the next SCT and collimator. When Byron finished, the next scope was ready for him as was the next scope in line for set up… very smooth work flow… oh… I manned the camera and donuts!

Folks that joined in the festivites along with Byron, Sam, Mike, and I were John, Rusty, Robert, Alan, and Eric… and all in all we collimated 8 scopes and 2 HyperStars… as of yet, i don’t think we have had decent enough weather for anyone to report back as to how well their scope was now performing.

For those of you that couldn’t attend, do not despair! We still have the 2 QCAS scopes to collimate and the 14″ at Menke… so Ken and Matt we can fit ya in! And Alan, you’ll need to bring in your second scope!

Some other cool things happened… folks were able to check out the different models of SCT’s that were brought in… were able to check out 2 relatively unusual EQ mounts, the SkyWatcher EQ6r and the 10 Micron GM1000hps… also, seeing how well Feather Touch focusers worked as well as Baader Clicklocks! Robert decided to go ahead with the purchase of a Clicklock for the 14″ SCT at menke… which was ordered and was already delivered and waiting for installation. Alan is contemplating a Clicklock for PAC’s SCT as well as an upraded 2″ diagonal…

So… like I said… a fun time… donuts… saw unusual gear… learned how to make some improvements… and all on a cloudy day!

See ya soon… and Clear Skies!

About the Author: Jeff Struve