In a few days we will have a nice treat to view from here in the Quad Cities. Beginning at 8:35pm the Full Moon will begin to move through the shadow cast by the Earth ultimately resulting in a Total Lunar Eclipse. A Total Lunar Eclipse are typically refered to as a Blood Moon due to the dark red or coppery appearance of the Moon whilst within the deepest part of the Earth's shadow which is called the Umbra.

The above diagram from NASA gives you an idea of what's actually happening. When the Moon enters the Penumbra, a dimming of the Moon's surface can be observed as the edge of the shadow advances. This point is called Penumbra first contact and begins the Partial phase of the eclipse. If the Moon were to pass only through the Penumbra of the Earth this would be a partial eclipse and nothing more. But this month the Moon will make it into the deeper Umbra of the Earths shadow. Then the deeper portion of the shadow begins to cross the surface it is called (you guessed it) Umbral first contact and this begins the Total phase of the eclipse. When the Moon has made it's way as deep into the Umbra as it can, this point is called Maximum Eclipse. That time is what is typically listed as the time of the Eclipse.

If the clouds stay away, the relevant times from this eclipse as visible from the Quad Cities are:


Let’s keep our fingers crossed for no clouds! It’s always sweet to have a Blood Moon at a prime viewing time like this. The next one isn’t until May of 2021 so try no to miss it!

Update: The forecast for Sunday night is now partly cloudy. Since the weather guru’s keep referring to winter weather on either side of our Blood Moon event, I figured I’d post a few pics from QC Area Blood Moon’s past. 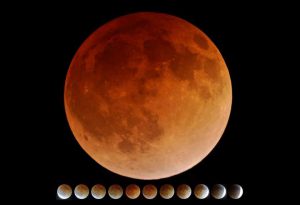